I recently received a phone call from an expectant mother who just found out she was now a widow-her dear husband has just been tragically killed in a head-on collision with a driver who drifted left of center.  I don’t know about you, but I rarely feel adequate to know not only what to say but how to say it in those overwhelming moments of shattering crisis.  How do we help broken people?

Below is an enlightening illustration of dealing with broken people: 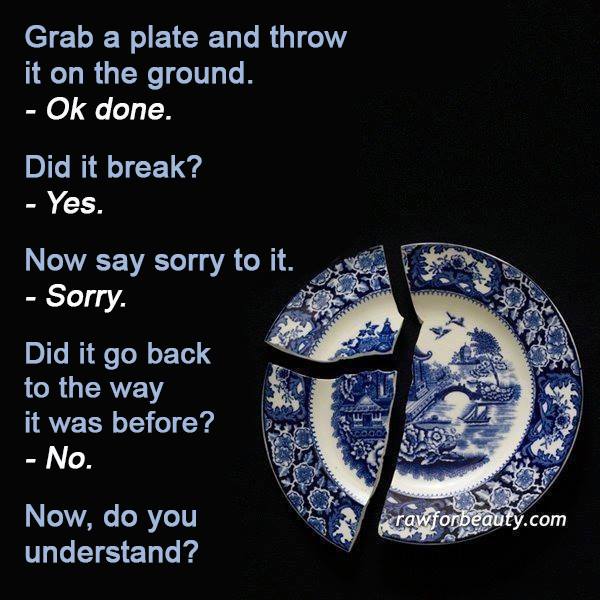 As we listen, talk, preach, counsel with hurting hearts, we should not be the proverbial “bull in the china shop.”  The operative word is…gentleness.

Paul modeled this tone in his relationship with the believers in Thessalonica:

I Th 2:1-13 “For yourselves, brethren, know our entrance in unto you, that it was not in vain: But even after that we had suffered before, and were shamefully entreated, as ye know, at Philippi, we were bold in our God to speak unto you the gospel of God with much contention. For our exhortation was not of deceit, nor of uncleanness, nor in guile: But as we were allowed of God to be put in trust with the gospel, even so we speak; not as pleasing men, but God, which trieth our hearts. For neither at any time used we flattering words, as ye know, nor a cloke of covetousness; God is witness: Nor of men sought we glory, neither of you, nor yet of others, when we might have been burdensome, as the apostles of Christ. But we were gentle among you, even as a nurse cherisheth her children: So being affectionately desirous of you, we were willing to have imparted unto you, not the gospel of God only, but also our own souls, because ye were dear unto us.  For ye remember, brethren, our labour and travail: for labouring night and day, because we would not be chargeable unto any of you, we preached unto you the gospel of God. Ye are witnesses, and God also, how holily and justly and unblameably we behaved ourselves among you that believe: As ye know how we exhorted and comforted and charged every one of you, as a father doth his children, That ye would walk worthy of God, who hath called you unto his kingdom and glory. For this cause also thank we God without ceasing, because, when ye received the word of God which ye heard of us, ye received it not as the word of men, but as it is in truth, the word of God, which effectually worketh also in you that believe.”

Too effectively minister the comforting and clarifying Word of God requires you and me to discard the harsh feel and abrasive verbage.  What do the “broken vessels” in our homes, churches, and communities need to hear from us-tender truth!